State of the Bases

State of the Bases

Hear directly from base leadership about the current status of each base and the outlook for the next year.

The Beaufort Regional Chamber is proud to present its annual State of the Bases breakfast. Keynote speakers for this event include leadership from the three military installations in the Tri-Command: Marine Corps Air Station Beaufort, Marine Corps Recruit Depot Parris Island, and Naval Hospital Beaufort. This event is open to our membership, the business community, citizens and military community of the Beaufort region. 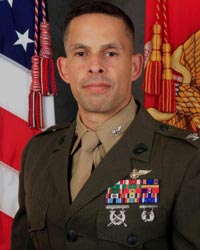 Colonel Miller graduated from Bucknell University with a Bachelor of Science in accounting and was commissioned a second lieutenant in 1994 through the Platoon Leaders Course. He was designated a Naval Aviator on 8 August 1997 and reported to HMT-204, Marine Corps Air Station New River for training in the CH-46E.

In January 1998, First Lieutenant Miller reported to HMM-266, where he served in a number of billets to include Weapons and Tactics Instructor and Operations Officer. During this period, he participated in two LF6F deployments with the 24th Marine Expeditionary Unit. Captain Miller was selected for the MV-22 transition and checked into VMMT-204 in March 2003. He qualified in the MV-22 and became a member of the squadron’s initial instructor cadre.

Major Miller transferred in March 2006 from VMMT-204 to VMM-263, the first operational MV-22 fleet squadron. He served as the Future Operations Officer during the initial transition, followed by Logistics Officer during the unit’s deployment to Operation IRAQI FREEDOM 06.08. Major Miller detached and was assigned to VMM-261. He served as the Operations Officer as the squadron transitioned from an HMM to VMM. The squadron conducted the first deployment of the MV-22 to Afghanistan in support of Operation ENDURING FREEDOM 10.1 and during the deployment he moved to Executive Officer. 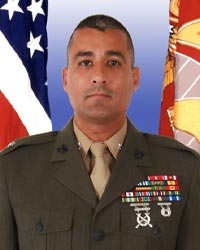 Colonel Rodriguez is a native of Somerville, Texas. He graduated from the University of Texas at Austin and was commissioned in the Marine Corps through the Naval ROTC program in May, 1995.

Second Lieutenant Rodriguez completed The Basic School (TBS) and the Infantry Officer’s Course in 1996 and was assigned to 2d Light Armored Reconnaissance Battalion, 2d Marine Division. While assigned to 2d LAR Battalion, he served as a Platoon Commander, Company Executive Officer and deployed with Battalion Landing Team 2/2, 22d Marine Expeditionary Unit. In 1999, First Lieutenant Rodriguez transferred to 3d Recruit Training Battalion at Marine Corps Recruit Depot, Parris Island, South Carolina. He served as a Series Commander, Company Executive Officer, Battalion Operations Officer, Company Commander and worked in the G-3. Following completion of the Armored Captains Career Course in Fort Knox, Kentucky, Captain Rodriguez took command of Company B, 3d Light Armored Reconnaissance Battalion where he deployed with his company to Iraq in support of OPERATION IRAQI FREEDOM and to Okinawa, Japan as the LAR Company Commander, Combat Assault Battalion, 3d Marine Division. Upon his return from Okinawa, Captain Rodriguez was assigned as the Marine Officer Instructor, NROTC Unit, Tulane University in New Orleans, Louisiana. Following his tour in New Orleans Major Rodriguez completed Command and Staff College and was assigned as the Executive Officer of 2d Light Armored Reconnaissance Battalion, 2d Marine Division where he deployed to Afghanistan as the CENTCOM LNO to CJTF-101 and upon his return served as the commander of 2d LAR Battalion (Rear).

Colonel Rodriguez is married to the former Shelley Hubbs of Somerville. Texas. They have two children. Isabel (23) is married and attends Texas A&M – Texarkana, in Texarkana, Texas. Isaac (19) attends Finlandia University in Hancock, Michigan where he plays baseball. 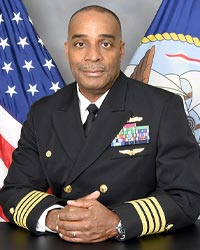 Capt. Robert Jackson is a native of Kalamazoo, Michigan. He received a Bachelor of Science degree in Human Physiology from Michigan State University and a Doctor of Medicine degree from the F. Edward Herbert School of Medicine, Uniformed Services University of the Health Sciences.

Capt. Jackson was commissioned an Ensign via the Aviation Officer Candidate School in 1985, and reported to VT-10 in Pensacola, Florida for Naval Flight Officer (NFO) training. Upon completing Basic Flight training he reported to Mather AFB for Advanced Navigation training and received his wings as an NFO in June 1987. After completing Fleet Replacement Squadron training with VP-31 at Naval Air Station Moffett Field, California, he reported to VP-9 also located onboard Moffett Field, achieving designation as Patrol Plane Navigator/Communicator, Tactical Coordinator, Mission Commander, Squadron Duty Officer and Command Duty Officer. In 1988 Jackson deployed to Diego Garcia and the Kingdom of Saudi Arabia in support of Operation “Earnest Will”, and in 1990 to Misawa, Japan. Capt. Jackson’s next duty station was the United States Naval Academy where he served as an Admissions Officer. Capt. Jackson was subsequently selected by the Commandant of Midshipmen to serve as the 17th Company; responsible for the academic, physical and moral development of over 300 Midshipmen during his tenure.

Capt. Jackson was selected to attend medical school, graduating in 1998. He completed an internship in General Surgery at the National Naval Medical Center in Bethesda, Maryland. He subsequently completed a residency in Anesthesiology at the National Capital Consortium at the National Naval Medical Center, Bethesda, Maryland and the Walter Reed Army Medical Center, Washington, D.C. Upon graduation in 2002 Jackson was assigned as a staff anesthesiologist at U.S. Naval Hospital Okinawa, Japan. During this tour he served as Head, Department of Anesthesia, Process Improvement Physician Advisor and Chairman, Executive Committee of the Medical Staff. Follow on assignment was to Naval Hospital Jacksonville Florida in 2005. Capt. Jackson held numerous leadership positions during his tour of duty at Naval Hospital Jacksonville to include Special Assistant to the Commanding Officer for Process Transformation, Department Head of Anesthesia, Chairman, Executive Committee of the Medical Staff, Credentials Committee Member, and Physician Champion for the TeamSTEPPS Patient Safety Program. Following this assignment, Capt. Jackson served as the Executive Officer, U.S. Naval Hospital Rota, Spain. 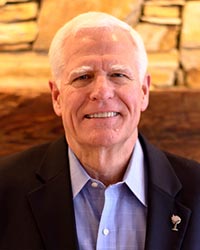 Charlie Farrell is a banking and finance graduate of the University of South Carolina where he played basketball for Coach Frank McGuire. He flew over 3,000 hours as a fighter pilot (F-4, A-4, A-7, F-16) with the Marine Corps and Air National Guard. He owned two commercial printing companies before he started professional development training, specializing in programs to develop skills in leadership, teamwork, and personal productivity. His repeat clients include General Electric, 3M, Mayo Clinic, Federal Reserve Bank, Ocean Spray Cranberry, and Michelin. Charlie is a trained mediator and attended the Harvard Law School Negotiations Workshop taught by Roger Fisher, author of Getting to Yes. He travels extensively, having visited all 50 states and 30 foreign countries.

Charlie has authored numerous articles and two books. Courage To Lead, in its sixth printing, is used by many organizations and universities in their leadership training. Keep Your Wallet Open and Your Mouth Shut is a humorous look at how fathers can survive the wedding of a daughter.

Having been an adjunct faculty member since 1992, Charlie served 3 years as Director of Executive Education in the Darla Moore School of Business at the University of South Carolina. In April 2012 he was appointed Director of the South Carolina Aerospace Task Force under the Department of Commerce. He was appointed Executive Coordinator for the South Carolina Military Base Task Force in July 2013. In 2015 Charlie was inducted into the Richland School District One Hall of Fame.

Check out a few photos from our last State of the Bases event. See the full gallery on Facebook ›